Unlike traditional web development, which focuses on building web pages and applications, Large Language Model (LLM) application development involves working with natural language prompts and integrating your data sources to create workflows. The LLM provides a natural language interface for your users to provide input and to generate natural language output. However, the LLM is limited. The content that is in it’s training set is all it knows. It’s the same for all users and isn’t very good outside those bounds.

If you want to build a differentiated LLM AI product you have to either a) use the model in a novel way (which can then be ripped off) b) bring a new dataset to it and do something more focused/domain specific than the general purpose LLM or c) build integrations on top of it that do useful stuff.

There are two phases and 8 steps to LLM application development.

Once your application is deployed you move on to the next stage: Iteration. Unlike web apps, LLM apps generate data that can be directly incorporated back into the app to improve performance. LLM models can produce non-deterministic output (generative use cases), it’s important to monitor performance to know how your model is doing with real world data. Whatever data was used to train the model might not match the data it sees in production, there’s always a chance it performs poorly. Observability and monitoring are important investments.

For these LLM apps, the input and output are typically in the form of text. LLMs are accessed using prompts with instruct the LLM what kind of output to produce.

LLM application development is still in the very early stages. There are a few open source and a few paid/hosted application frameworks for building and deploying these apps. No clear market winner has emerged, but some of the open source tooling appears to be gaining traction.

Tagline: “Built on years of experience working with large language models. With one goal, help accelerate their deployment.”

Currently (2023-01-23) dust only supports a few external data integrations, but has a few planned.

Dust is a framework that provides a notebook style interface to explore a specification for your LLM chain. It reads kind of like a jupyter notebook maths example. You can build apps and deploy them to dust.tt and evaluate it via API or in the web app UI. You can generate the app specification (or clone an existing one) using the GUI builder. 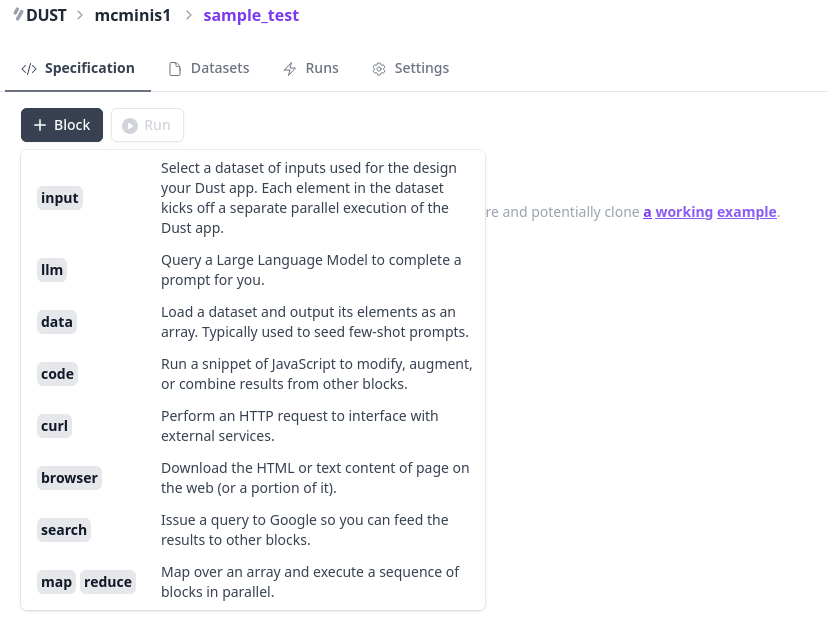 You can add new sample, training, or testing data manually:

You can easily review past local or API runs:

Building and deployment seem pretty easy. Iterating seems a bit more manual. If you’re looking for something hosted and fairly easy to get started with, this is a good option. It doesn’t feel quite ready for production use.

LangChain is a python framework for building LLM applications. It makes it easy to manage LLM providers and chain together the steps in your app. It’s not a complete solution to building and deploying. Those parts would be handled the same as a web app (up to the developer to design and deploy). 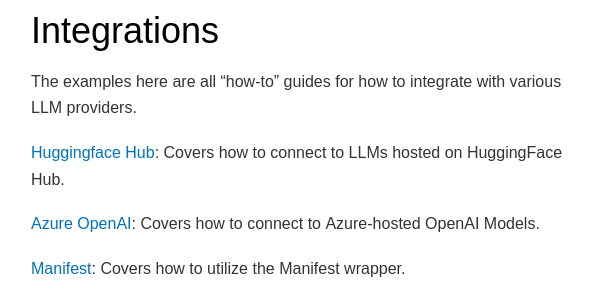 Because LangChain is built on python, it’s easy to integrate with other data providers using the same libraries you would in a python application. It does also have some more LLM specific utilities built in to make LLM development easier: 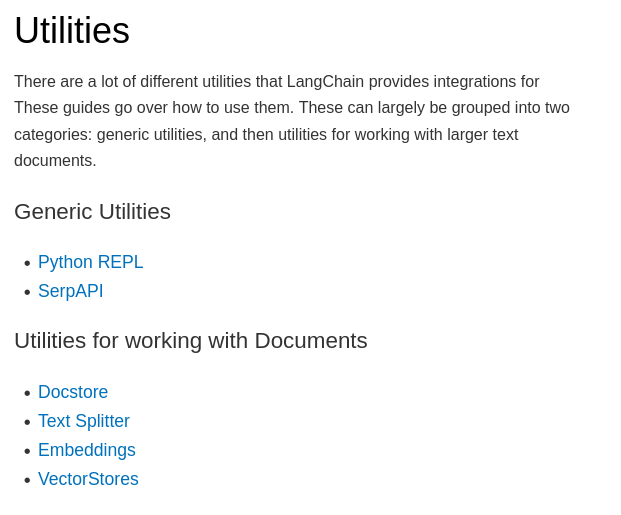 It uses the cohere embeddings, and elasticsearch as the VectorStore.

One of the most useful parts of LangChain is the memory component. Memory is used to keep track of state between steps. There are several forms of memory you cna use depending on your use case. 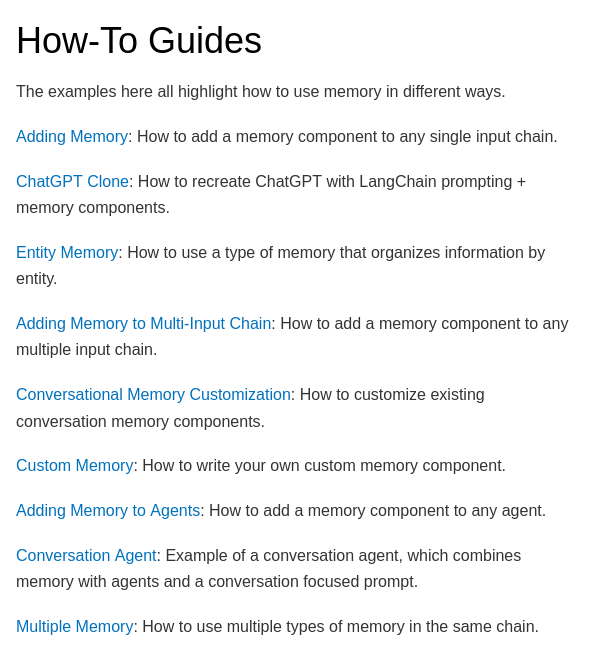 For instance, if you wanted to create a ChatGPT clone you can use ConversationalBufferWindowMemory.

A few deployment options are outlined using other libraries.

If you’re a developer and looking for a library to help you build something, this is the go-to LLM application framework. You can integrate it into whatever else you’re building pretty easily.

Tagline: “An index created by GPT to organize external information and answer queries!”

It can be integrated with LangChain to provide an arbitrarily large memory. It also can use any of the LLMs LangChain can be configured to use.

GPT Index is a useful component for build LLM applications, but isn’t a full framework itself. Methods for

Patterns is a startup that started building a data engineering platform to enable mixed python/sql data workflows with rich integrations and an easy to use GUI editor. Since then, they’ve been adding a lot of functionality to enable more complex data flows including LLM apps. They recently published a blog post that demonstrates an offline fine tuning and slackbot serving workflow.

There is an out of the box OpenAI connector as well as one for Cohere.

You can clone an existing app, or start from scratch.

The app is defined in code and contains the methods you call as well as the graph object. 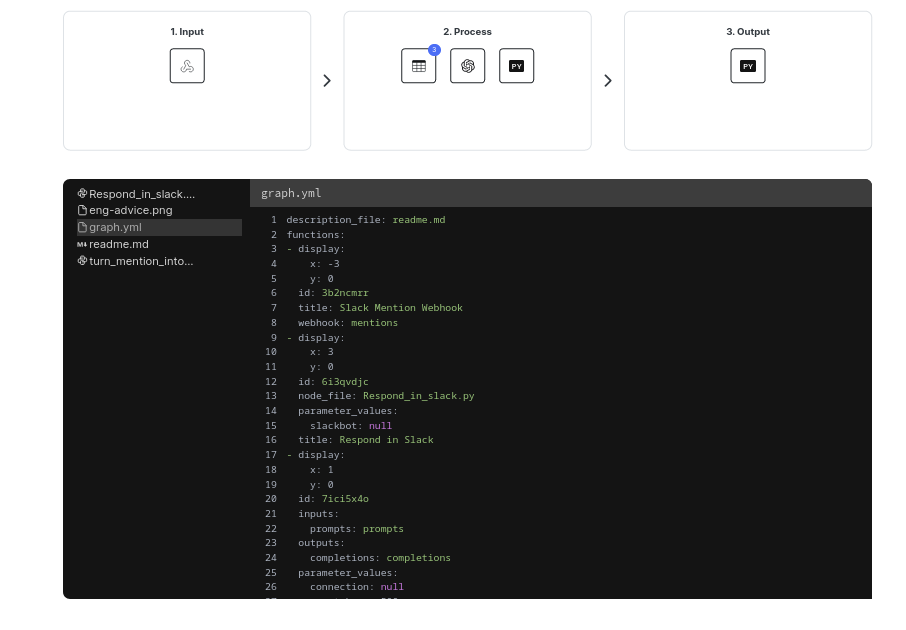 Deployment and runs are all handled by the hosted platform.

This seems to be the most full featured of the hosted options. It doesn’t have some of the components available in LangChain baked in, but you should be able to import them and use them in a workflow.

It’s hard to tell, what this is exactly because it’s behind a request early access form. From the website, it seems to be an app platform focused on a/b testing models, rapidly switching between them, and tag examples for fine tuning to drive cost effectiveness.

Tagline: “We build the blocks on the foundations. You build the rest.”

Early access, but no public availability. It seems focused on rapidly rolling out apps in a bunch of different domains. Perhaps they’re running a series of small bets or developing intuition for a LLM application framework and platform.

There are several hosted and open source options for LLMs:

Hugging Face has the largest open source model repository. Most recent LLM researchers publish their models to the repo along with their paper.

If you are planning to self host, this is a great place to get your foundation model. They also provide hosted solutions and infrastructure to train models.

You can access hosted versions if the OpenAI models using either Azure OpenAI service or OpenAI.

If you want a hosted version of one of the GPT series models, this is your best choice.

Cohere’s tagline is “Making NLP part of every developer’s toolkit”. They provide endpoints to classify, generate, and embed text. Their goal is it easy for developers to use NLP, and their sdk is very streamlined. For instance, fine-tuning is an easy to use endpoint with very little configuration.

For engineers that want an easy way to get into LLM models, cohere is a good choice.

AI21 studio is creating their own modified version of the GPT models known as the “Jurassic” series. They allow for a larger number of tokens in the context.

Worth keeping an eye on them if you’re using GPT-like models and want to see if performance or price are better for you use case.

Aleph Alpha is an EU based LLM provider. FOr those that need something in the EU and with EU languages it’s a good choice.

Baseplate is a very new entrant (YC W23) to the space. They focus on fine tuning language models for increased domain specific performance and reduced cost.